New in v2.1: The EXPLAIN ANALYZE statement executes a SQL query and returns a physical query plan with execution statistics. Query plans provide information around SQL execution, which can be used to troubleshoot slow queries by figuring out where time is being spent, how long a processor (i.e., a component that takes streams of input rows and processes them according to a specification) is not doing work, etc. For more information about distributed SQL queries, see the DistSQL section of our SQL Layer Architecture docs.

The user requires the appropriate privileges for the statement being explained.

A processor is a component that takes streams of input rows, processes them according to a specification, and outputs one stream of rows. For example, an "aggregator" aggregates input rows. <index>@<table> | The index used. Out | The output columns. @<n> | The index of the column relative to the input. Render | The stage that renders the output. unordered / ordered | (Blue box) A synchronizer that takes one or more output streams and merges them to be consumable by a processor. An ordered synchronizer is used to merge ordered streams and keeps the rows in sorted order. left(@<n>)=right(@<n>) | The equality columns used in the join. rows read | The number of rows read by the processor. stall time | How long the processor spent not doing work. This is aggregated into the stall time numbers as the query progresses down the tree (i.e., stall time is added up and overlaps with previous time). stored side | The smaller table that was stored as an in-memory hash table. max memory used | How much memory (if any) is used to buffer rows. by hash | (Orange box) The router, which is a component that takes one stream of input rows and sends them to a node according to a routing algorithm.

For example, a hash router hashes columns of a row and sends the results to the node that is aggregating the result rows. max disk used | How much disk (if any) is used to buffer rows. Routers and processors will spill to disk buffering if there is not enough memory to buffer the rows. rows routed | How many rows were sent by routers, which can be used to understand network usage. bytes sent | The number of actual bytes sent (i.e., encoding of the rows). This is only relevant when doing network communication. Response | The response back to the client.

EXPLAIN ANALYZE will execute the query and generate a physical query plan with execution statistics:

To view the DistSQL Plan Viewer, point your browser to the URL provided: 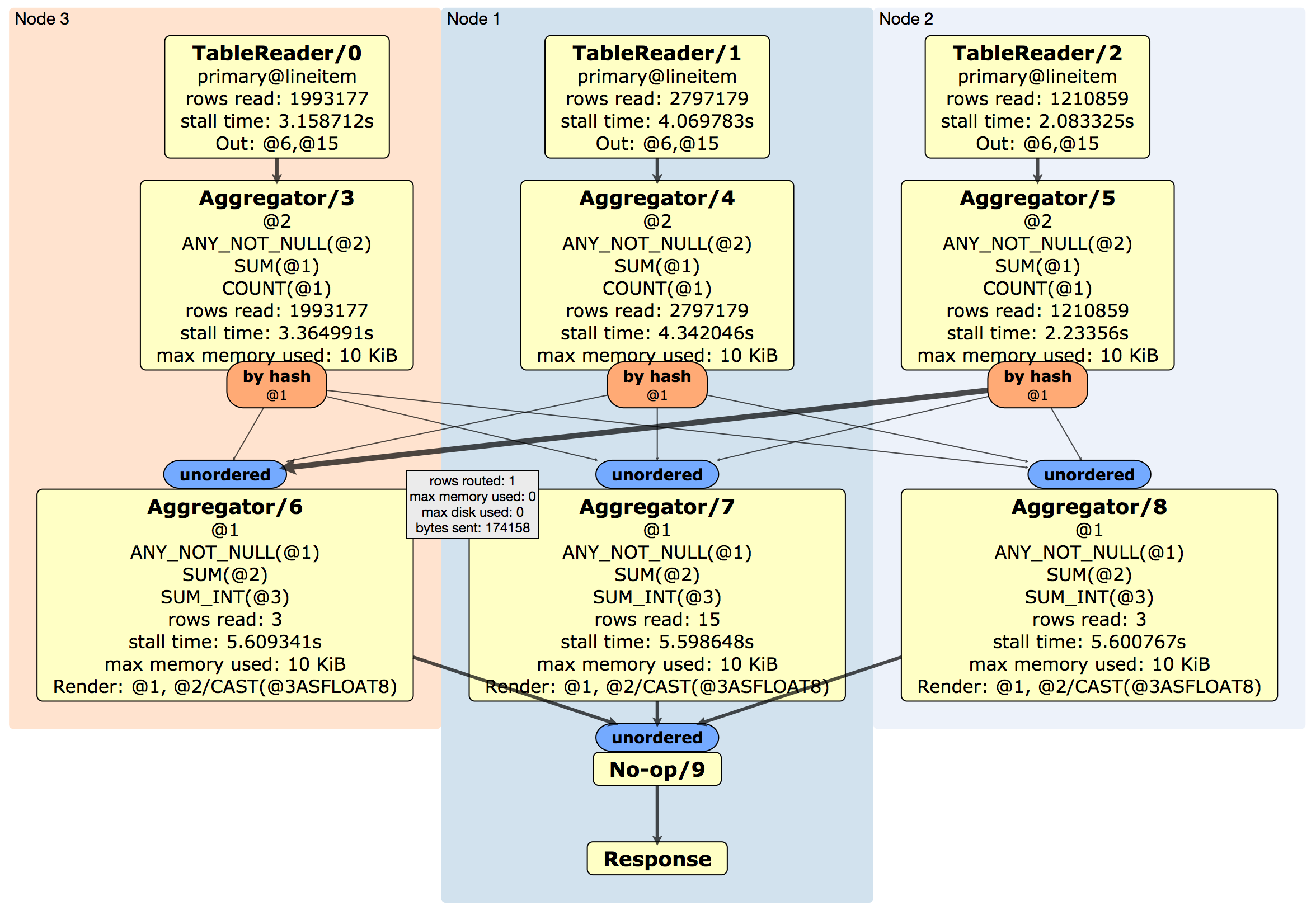